Good News: I'm down 1.1 pound since last week. Very happy about this. I am trying to eat more mindfully, paying attention to whether or not I am actually hungry, and only eating when I genuinely am. (and only eating what is necessary, not as much I as I want!!)

All kinds of reasons to lose weight: I want to stay healthy. I want to keep up with my grandchildren. I want to go easy on the aging joints. And I want to be good to the body God has given me. I want to honor His gift by taking good care of it.

God is good. All the time.

Why didn't I post last week? Because I was very sick with a gastrointestinal bug. Yeah, very sick. Yes, yes, that does account for some of the loss. But a loss is a loss, right? I didn't gain it back after my recovery.

Am I serious about want to lose weight or not. Being serious means not trying to eat as much as I can get away with. It means eating as little as I need. :-)

Posted by Rosemary at 5:59 PM No comments:

OK! Good news. I am down. I am down two pounds from last week and 2.8 overall. (Because I had a gain one week.)

Overall, I am still a pound up from when I started two weeks ago. This is not good. Time to wake up and remind myself, maybe many times a day, that I will not lose weight unless I eat less food.

I must eat only when I'm hungry and stop when I am full. That's it.

Hopefully this week will go a little better. Time to get serious. Do I want to eat whatever I want, whenever I want, or do I want to lose weight? That's the question. I hope I know the answer.

Posted by Rosemary at 7:17 PM No comments:

All right. I have to confess. I am UP 1.8 pounds. I write this having just finished a small bowl of sweet potato chips that I did not need.

Eating when I am not really hungry is not in my best interests. If I want to lose weight I must stop eating for fun. God does not want me to waste food by putting in my mouth food that I do not really need.

Time to get serious. My daughter is getting married next year. Wouldn't I like to wear something in a good size, instead of looking for a dress that does not look too bad at this weight? Yes, I would.

Extra weight is hard on the joints. Nuff said? I'm getting older. I want to be able to have maximum mobility.

OK. Next week I hope to do better. And I pledge to work a little harder this week. Bottom line? No eating for fun.

Anyone else working on this? How is it going?

Posted by Rosemary at 2:51 PM No comments: 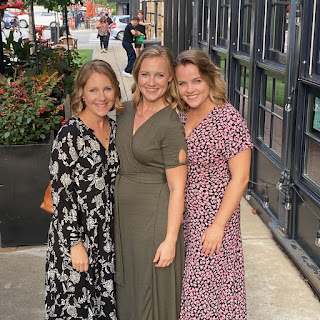 My daughter has pointed out to me that years ago I had a blog post thread called Weight Loss Wednesday. She read me some of the posts. Hehe. Could hardly remember writing those.

Anyway, I've decided to start it again. I will not tell you my weight. But I weighed myself today and next week on Wednesday I will confess to either a loss or gain or no change.

Feel free to join in in the comments. I think even this little bit of accountability (having to put it in writing) will help me stick to my goals.

I don't have as much to lose as last time but good health is important, especially as I get older. Well, everyone is getting older. Let's face it.

I told my daughter how old I would be on my next birthday. Her response. Haven't you been that old for the last 5 or 6 years? I am not lying about my age! She is revealing her perception of me as, well, pretty old. I am, after all, more than 40 years older than she. Yeah. Bonus baby. And a lovely one at that! I have two bonus babies actually. Unusually special gifts from God. Unusually special because they are rather rare. I am blessed with three daughters, but two after my fortieth birthday.

God is so good!

Posted by Rosemary at 9:44 AM No comments:

This is my grandson. As he made little lines by pulling his fingers against the nap of the fabric on this chair my thoughts went back some sixty years.

I used to do the very same thing when I was a little girl. It was fun. And all you had to do was brush your hand over the fabric again and the lines would disappear. 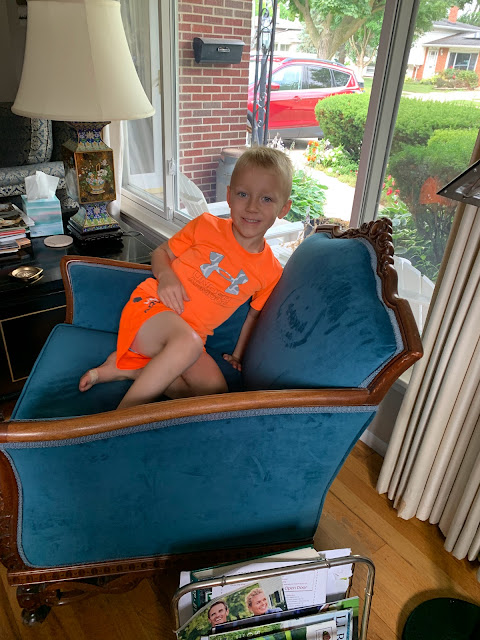 My brother and sister and I had all done it. Then I realized not only did I do that myself but I did it on this exact same chair which was in my grandmother's living room. I can remember it so clearly. The chair has been reupholstered several times, but it's the same chair. I explained to my grandson that I had also done that when I was little and that the chair belonged to my grandmother then.

I tried to explain to him who my grandmother would be in relation to him. I was kind of shocked to realize that the woman I remember so clearly was his great-great grandmother! Two greats!! I think it was kind of hard for him to imagine that his nana had a grandmother. 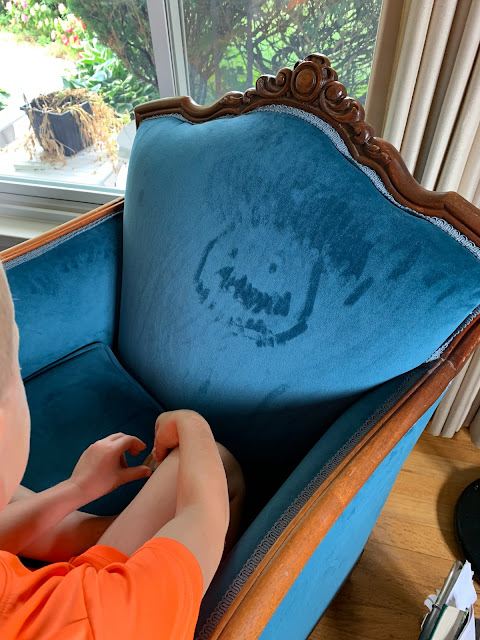 And check out this picture! I think it's better than I ever remember drawing! Both of those grandparents were artists-- musicians. My grandfather also made oil paintings in his retirement. I bet they're both smiling at this work of their great-great grandson on the furniture that used to grace their living room.

Somehow we remain connected by threads of memory to those who went before us. And somehow, I am quite sure, they must be pleased. God rest their souls.

Posted by Rosemary at 9:00 AM No comments: